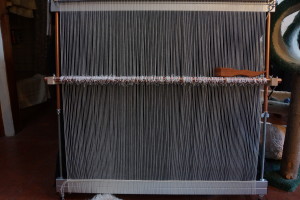 Why, what is that?

Ah, yes, an empty warp with a fresh header on it.

An empty warp in the correct sett to make tapestry with churro blanket weight yarn in all colors.

Everything has been entangled and difficult since I started weaving in the light cottons, against the rules I set for myself at the start of the year. Everything has been kerfuffled. Every step forward has come with fifteen assorted dance steps in corkscrew curls.

What, magical thinking? Me?

Always. And it doesn’t escape me that this creative endeavour is beginning again on the cusp of Imbolc, or Brid, or Groundhog Day, or whatever you want to call the secret start of Spring.

I took the cotton sections out, even the ones I really liked. I figured out how to adjust the sett on this loom without completely removing and replacing the warp. And 4 or so hours later, here I am, back at the beginning. 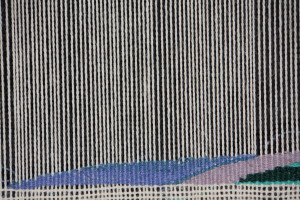 I went into today’s weaving thinking that yes, today, for sure I was taking the night off. I am oddly sleepy and tired, but I wound up starting a day’s section, then finishing it – all in what my family calls one swell foop. At first I planned a series of vertical leaning stripes, and I started with the pale lavender. But then I started, well, swooping. Swooping and hatching colors and shifting the lines of things.

Swoops can distort the final fabric, causing a bubble, but this is such a small area I think it will be almost unnoticeable. And if it isn’t, that’s fine, too.

Again, the photo isn’t quite fine enough to show the swoops clearly. They break up the neat little lines of weave, distorting the flow of things.

Technically, the technique is often called “distorted weft” in tapestry. But I think it’s a swoop, and a swell foop at that. 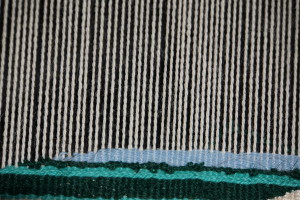 Today at work everything that should have been easy became mysteriously tortuous and labyrinthine, and I said to a colleague that it felt like swimming through peanut butter.

I should point out I have never actually tried swimming through peanut butter, and also that I buy the softer, more liquid natural brands. Anyway, when I got home and faced the loom (and answered the “no, I’m too tired; it’s all right; I don’t have to” inner voice with a pleasant “no, I *don’t* have to, but I am going to”), I wondered how one weaves the sensation of swimming through, well, anyway.

The literal picture wasn’t going to cut it.

The key is the idea of texture: crunchy or smooth, if you will. So tonight’s weaving is very hard to photograph properly at night with a flash. There are different textures arising from the juxtaposition of bouclé yarn in all its curls against very smooth yarns, and from the juxtaposition of flat-woven lines of each against lines woven in soumak. The soumak detail is what I can’t get in this photo. I can see it in the pale green because I know it’s there, but in the current light I can’t get enough of a close-up to show the variation. [The photo is also driving me nuts because the flash gave a ghost of warp under the flat, smooth pale blue on the top, and when you look at it with the human eye you don’t see that at all.] If you care to learn more, there is a clear and easy description of soumak here.

I ate the peanut butter when I got home, for dinner. Creamy. On toast, with locally made triple berry jelly. Take that, powers of confusion and stress. 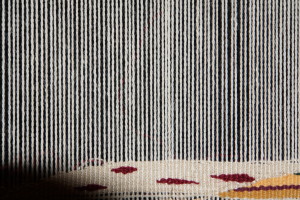 Today, for the first time, the weaving reflects the theme of the day: unexpected, irregular, semi-random bumps in the road.

Aggravation. Irritation. But I think, in the end, it will work nicely into the overall weaving. So now it has a purpose, yes? Much better.

I’m also happy that I wove this evening. Bumpiness meant part of my brain was busily concocting excuses for not weaving, which bumped my guilt monitor into overdrive in the other direction, until I felt like one of those cartoon characters with an angel on one shoulder and a devil on the other – but neither of my prompters was angelic or positive or useful in the least. In the end, I wove because I decided to, because I wanted to, because the yarn feels good in my fingers.

None of these voices is the one I choose to be mine. I am doing something I love, and every hour I do it I get closer to being able to make what I dream of making. 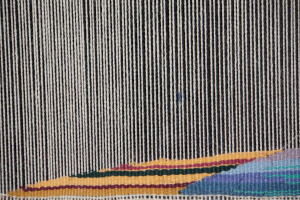 Things look a bit uneven, but this is temporary and due to the “built” nature of the tapestry. As areas around each section fill in, the section settles and is beat in evenly.

It’s a little like memory. It changes shape and takes its proper place in context.

What will tomorrow bring? And will the cat ever forgive me for ignoring her after I come home from work? 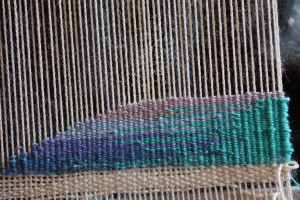 I even sampled this time – I am often too lazy. I sampled this sett (number of warp ends per inch) with some of my churro blanket yarn, and it worked beautifully. But churro is notoriously uneven, and I made the mistake of not sampling all the colors at this sett. Either the difference is the extra tension on the Mirrix loom (much higher than I get on my little sampling set-up) or the unevenness of the different colors of churro (all the same weight, most from the same vendor). Either way, about half my colors of churro won’t weave as tapestry on this loom with this warp at this sett. They leave bits of warp showing. I had chosen the highest sett at which I thought I’d get tapestry reliably, because that would allow for a bit more detail, but I should have sett this at 10, not 12.

Life often presents unpleasant choices, doesn’t it? But some work out fine in the end.

The choices are: rewarp the loom (NO!!!!) or switch weft. I am switching weft. Instead of churro wool, I’ll swap to using leftovers of cotton, and maybe also bamboo and tencel. This could be fun . It will give a chance to play with texture and shine as well as shape and color. The downside: this will be finer weaving, and the daily section will take longer if I still plan to cover the whole warp.

Oh, well. Maybe next year for churro. And today I will remove yesterday. If only one could undo all mistakes so easily, and with so little lasting harm. 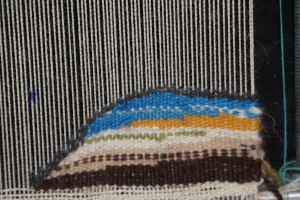 e. Some colors and a shape.

It isn’t what I meant to start with, but my hands seem to have done it anyway. It doesn’t look like much, or mean much, but let’s see what comes next to it, and on top of it, and how it builds.

I’m not even sure I like it, yet, but I think it ought to stay.

One has to start somewhere. 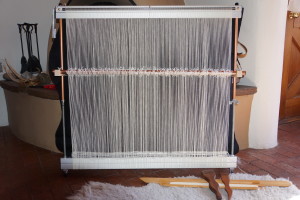 Here we are, hovering upon the brink. The past few days have seen a lot of heddle preparation. There are just over 400 warp threads, so that’s a lot of heddles to prepare.

The heddles are on now – with one error that, fortunately, was fixable without too much heartache and undoing. The spacing and heading are just starting to show at the bottom. They need more fiddling, and I am out of patience with fiddling right now, so I am enforcing a break. My fingers itch to rush through the header and get on to the pretty bits, the color, the place that other people call the start. But the weaving would be uneven, cranky, with too much draw-in at the bottom. It’s worth a touch more patience to get it right, so the work will be a pleasure.

“Philippa, who was rarely favoured with the more dramatic ailments of this world, had a head cold of historic virulence. ”

One of the many reasons I love Dorothy Dunnett, for writing a heroine who suffers from a prosaic cold. I suspect Harriet Vane is, through long line, descended from Phillipa Somerville (though in literary history the opposite is more likely). 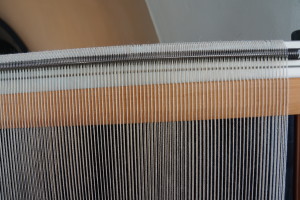 There has been progress today, but here it stops until the cold and the fogginess it brings are gone. Mistakes in placing the heddles are disastrous. Each warp thread gets a heddle, but (in this case, and in most cases in tapestry) the heddles are split between two bars. It is essential to pick up every other heddle for the first bar, then the alternating heddles for the second. Make a mistake midway through, and you have to go back and start from the point of the error. Fail to catch the error before you begin to weave, and it’s even worse. It is, without doubt, the most fiddly moment in tapestry warping.

I used a weaving sword and my little shed stick to lift every other warp thread, in preparation for placing the heddles, and I lost track of the number of times I had to go back redo this after making mistakes. Astigmatism makes this process hard enough, but astigmatism and cold-induced mind-fog – not a good combination at all. I believe I have it correct now, but I am stopping till I am clearer.

I’ve completed one other step. On a loom like this, to make it possible to weave a long length on a smaller loom, the warp threads are doubled around. They do not run from the top of the loom to the bottom and back again. They run from a warping rod in the back, over the top and around the bottom and onto the warping rod, then around the warping rod, under the bottom, and back to the top. This leaves one set of threads in front and one in back. The set in front are the ones on which one weaves. Every so often the warp is advanced, with the woven section shifting down and around to the back of the loom, and some of the back threads moving up and around to the front. It can be very distracting to see the back threads when trying to weave on the front – silly and horrible errors can result – so I hang a piece of black fabric off the back of the loom, just in front of the back threads. It has to be removed and replaced whenever the warp advances, but it’s worth the effort.

There’s a metaphor and a meditation in that, too, somewhere, but it’s time for another nap under a warm cat compress.